We don’t live in a very different world, but designers do know a few things very well that others don’t. These things are interestingly awesome

Shadows are not black

Fan of #00000? Shadows, dark corners and other visual elements you describe as black are not black for designers. Especially, shadows are not black, really they aren’t! Consider the image below. Clearly, the shadow is not your #000000 black.

Being a designer means that you are going to be judged ( a lot actually), more people leave design field after joining the professional world than those who leave it during college. The reason is that most designers are not prepared to take the heat. It is often counted as a vital skill for a designer to learn how to receive the proper feedback and ignore the junk by HIPPO’s or stakeholders with a bad taste/bias.

Well this technically isn’t the most hidden fact in the design community, but is infact one of the most ignored one. A good design always assists a user in completing his/her task without even being noticed.

A famous saying by Henry Ford pretty much sums up to this. Taking feedback from users is important, but it is equally important to have a deep understanding of what they need instead of what they want.

“If I had asked people what they wanted, they would have said faster horses.”

In real life, we are afraid of things that are sharp and we often tend to be cautious around them. The same applies to our designs, especially in selecting a typeface for a particular situation. A smooth and rounded typeface would appear to be more friendly and warm than the one with sharp edges.
Look at the image below and guess which one is the most friendliest 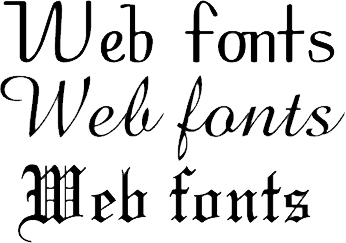 The empty place in most of the web apps

Be it Twitter, Facebook, Youtube or any other famous web app, you will end up finding that there’s little to no content on the bottom left of the web page. That’s because our pattern of reading from top to bottom which eventually forces the reader to move towards the extreme right.

The more option you give, the less people will buy

If you are selling a wide range of products online, chances are that your target audience will buy lesser. Users tend to buy more when there are less choices involved. This behaviour was presented by Barry Schwartz, an American Psychologist in 2004. Providing 3 to 7 choices is often the best practice as cited by George Miller.

I hope you learned something new here, and would love to hear from you if you have anything to say.

I am a Coffee-addict-with lost counts of consumption. Apart from this addiction, I have a deep passion for data and connected architectures. I ingrain technology into business processes to bring the next level disruptive solutions.